The Side Journey and Native Youth Olympics

Friday the wise men took a little side journey to go watch Tucker compete in a preliminary round of the Native Youth Olympics.  They snuck into the diaper bag and were peaking out every now and then.  Titus caught them one time and exclaimed, "Hey!  Where'd they come from?  I didn't see them when I was digging in there earlier!"  Hehehe...it's fun to keep these kids on their toes.

And speaking of staying on their toes...Tucker was able to compete in Native Youth Olympics (visit their website here for more details).  This was such an incredible opportunity to not only learn more about the culture around us, but for Tucker to stretch his physical and emotional abilities.  We hadn't heard much about these games, just the passing it's happening every year.  Not being Alaskan Native, we figured we'd just be in the bleachers watching.  However, the possibility to compete got thrown out there a couple of weeks ago during our homeschool PE class.  Then Wednesday the official was at Tok school teaching kids about the Olympics during their PE classes, and, voila, Thursday we were making the 60 mile trip down the highway to the Northway village so Tucker could participate.  We made sure to discuss that this year was a reconnaissance year, gathering information and techniques since we know absolutely nothing, so if he doesn't do all that well, he needs to remain positive and have good sportsmanship.  Then we'll come home with all the data we compiled and get to practicing for next year.  I felt this was very important for my Tucker to understand, especially since he'd be competing with kids 3 years older than him.  He has a competitive streak, for sure, but he's also very hard on himself when he can't get something.  He gets incredibly frustrated and would rather not try or half-heartedly try than to fail.  With this mindset in place, he did awesome.
Thursday was all afternoon and evening.  Tucker went all in, signing up for every event that came up.  The day started off with the Kneel Jump, which he did very well in.  Eskimo Stick Pull and Alaskan High Kick also was done on Thursday.  One event I was completely surprised that he did very well in was the Wrist Carry, or what I call...Torture.  Seriously, my wrist was hurting after watching this event.  The evening ended with the Scissor Broad Jump, which is a complicated coordinated series of jumps from two feet to one then crossing behind with the other and finally landing on the first foot.  It doesn't seem like it'd be that hard, but the crossing behind kind of throws you off.  Tucker did pretty good in this one, though his technique will get much improved with practice. 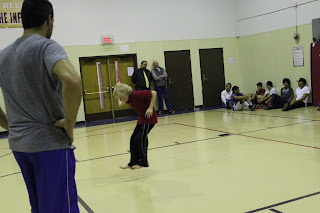 Friday was a shorter day starting at 8:30 (yes, we had to leave at 7 to get there on time) and ending at around 2.  Indian Stick Pull, One Hand Reach, One-Foot High Kick, and Seal Hop were the events of the day.  I was surprised how well Tucker held his own on the stick pull when he was put against boys much bigger than he is.  Though he lost, I was so proud of him when I could see his frustration in the tears in his eyes, but he pulled it together and continued on.  The One-Foot High Kick, which is very difficult had Tucker putting his all into it.  On his last turn, he kicked so hard and jumped so high that he's landing had him on his backside.  I made sure to let him know that when doing something, it's better to crash, knowing you pushed yourself beyond what you could do at the moment, than to play it safe and not.  Because how are we to truly know what we are capable of if we don't stretch ourselves!?  The Seal Hop was the most frustrating for Tucker.  With the older boys going quite a bit further than him, his seven feet or so, pushed him over the frustration wall and having a few tears fall.  Though when I pointed out that some kids didn't even make it off the line and he made it much farther than I ever could make it, he realized he hadn't done that bad.  Plus the reminder that the other boys were at least one if not two years older that he is solidified his accomplishment. 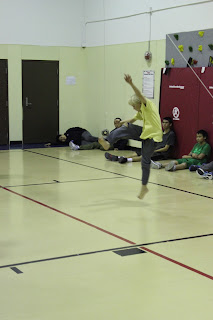 Overall, it was a pretty good competition for Tucker.  There was a young gentleman from Dot Lake who was amazing at all of the events.  Everyone was in awe while watching this kid push himself to kick higher, reach higher, everything -er than thought imaginable.  When we got in the car to drive home, we were talking about this teen and I mentioned to Tucker that his principal told me he practices all the time.  That he pushes through the pain and is always practicing focusing himself to get the it done.  When we got about 3/4 of the way home Tucker started asking about ways we could set up some of the events for practicing and if he practiced about an hour a day, would that get him in the direction that the Dot Lake guy was?  So I think he might be hooked!
Until next time...God Bless!!

Posted by Alaskan Blessings at 9:04 AM