A Traditional Alternative to Elf on the Shelf

I believe some might call me a bahumbug parent or worse, big ol' meany pants.  And while I'd be upset, I'd understand.  You see...we've never had a visit from Santa at our house.  I know!  Horrible Mom Award goes to....drum roll....me!  We do have our reasons, and it's not just to deprive our children.  The hubby and I decided when Tucker was born that we wanted the focus of Christmas to be on Christ and not to be distracted from the purpose we celebrate at all on the 25th of December.  So Santa has never visited. When we watched movies with Santa in them and were asked, we just would say he's make-believe and a fun story.  They even get pictures with Santa, but they know he's not real.  The kids, from what we've seen, haven't missed out on anything.  They still get presents under the tree.  They still get stockings filled in the morning.  They just know who they came from.

So when the elf on the shelf started popping up a few years ago, I didn't really notice all that much beyond the fact that he's a little creepy looking.  However, I'm starting to see more and more of this elf in Facebook and Pinterest, and quite honestly, it's a little heartbreaking.  I mean, we already are conditioned to start shopping and planning for the season early.  This year there were Christmas decorations up in the stores in the beginning of October!  October!!  The anticipation and celebration of the birth of the world's Savior is being drawn out and minimized by all the fluff and stuff and worldly materialistic views that now demand to be front and center.  And a little elf that is keeping tabs on our kids, making their focus be on their reward for good behavior when Santa comes just adds another distraction.

So...when posts of what the elf was doing started flooding the internet on Tuesday, I decided I'd make a way to build anticipation in our home for the birth of the Christ Jesus and draw our focus to Him, rather than ourselves.  How?  By following the three wise men on their journey to find the King.  Two years ago I wrote a post about an idea my grandma had given me about having the wise men travel across the room to the nativity scene throughout the month, which ended up being a pretty fun way to show the journey they made.  Tuesday a lightbulb moment happened when I thought--Let's take that great idea, mix it with the elf idea and have the wise men journeying to the Savior with the kids waking up to see what they are doing on their journey.  Since all my nativity scenes are glass and I wanted these playable, I got out my felt and fabric stash and went to work.  I downloaded a very cute nativity pattern from DoSmallThingsWLove over at Etsy.  You can get that here.  Obviously, with a baby and 3-year-old and everything else going on, I wasn't the quickest getting them together (two days isn't too bad!).  But now they are ready for their journey.  Now I just need to make my order to Felt on the Fly for more felt to finish the rest of the nativity!

This morning when the kids woke up, two of them were waiting impatiently by the clock because the other was late, like always!  (Well, really he just wasn't sewn together, but I couldn't wait any longer!)  What will they be up to in the morning?  I don't know!   You'll have to come back to see. 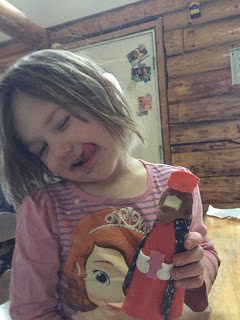 Posted by Alaskan Blessings at 12:05 AM